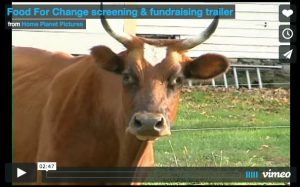 Food For Change is an 82-minute documentary film focusing on food co-ops as a force for dynamic social and economic change in American culture. This is the first film to examine the important historical role played by food co-ops, their pioneering quest for organic foods, and their current efforts to create regional food systems. Additionally, the film shows how cooperatives today strengthen local economies and build food security. The goal is to educate a wide audience about the principles of cooperation with a focus on healthy food and a healthy economy.

The project began when award-winning filmmaker and co-op member Steve Alves was asked to make a film for the Franklin Community Co-op, located in Greenfield, Massachusetts. Alves uncovered historical films and stories about the increase of cooperatives during the Great Depression — achievements which were later thwarted when consumerism and the cold war became dominant economic and social forces. Additional research revealed how food co-ops re-emerged during the tumultuous events of the 1960s as an alternative to factory farms and corporate grocery chains.

Part One describes the conditions that led to the Great Depression: fraudulent credit schemes; the control of industries by a few corporations; and increased wealth disparity. During the Great Depression national unemployment rose to 24 percent while employment within the co-op sector increased by 17 percent. As co-ops grew they restored hope to the millions of disenfranchised citizens who began to gain some control over their lives. WWII ended unemployment and brought the return of monopolies which quickly regained an influential position in government and laid the groundwork for a post-war culture based on consumerism and a permanent wartime economy, effectively halting co-op growth.

Part Two portrays the re-emergence of food co-ops as a product of the 1960s Civil Rights, War on Poverty, and anti-war movements. Led by a new generation seeking healthier food and radical social change, food co-ops and buying clubs sprang up across the United States by the thousands. At the same time two million family farms were driven out of business by large agri-businesses. Industrial farms grew bigger in size and smaller in number, relying on synthetic chemicals and mechanization to grow cheap food and reap maximize profits. On the retail side supermarkets also consolidated. National chains emerged with enormous market share and economies of scale, driving smaller grocery stores out of business and out of urban neighborhoods. In this hyper-competitive environment, most co-ops did not survive. About two hundred managed to continue by pioneering the growing niche market of whole and organic foods and maintaining cooperative values.

Part Three explores the present efforts of farmers, co-ops, and consumers to gain control of their local food economies. Farmers and co-op workers show how they maintain their livelihoods in a system dominated by agri-businesses and large grocery chains. The film also shows the impacts of a growing local food system created by food co-ops in the Minneapolis-St. Paul region of Minnesota, and the new wave of food co-ops occurring across the U.S. During the last ten years there has been a resurgence of food co-ops and their mission to work together to educate members and the general public about healthy food and co-operative economies. Co-ops offer a true alternative to corporate control of our food supply and also serve as vehicles for constructive social and economic change.

Read the annotated script for the film here.

Peruse the bibliography for the film here.

Seven years in the making, the film is now done. The exceptional story of cooperatives in America is told and a new organizing tool is available to educate co-op staff and members about the organization they’re a part and to reach the general public with the timely story of cooperation.

Together, 126 co-operatives in thirty-six states supported Food For Change. Now we need your help to increase the film’s impact.  Please read the Outreach & Distribution Plan that describes the audiences for Food For Change and the resources needed to reach them.

With your help, the film will spread the concept of cooperation to many more people, and define food co-ops as unique businesses in their communities. To review the outreach plan and get involved with the next phase, please contact us.

“Plant a radish, get a radish, never any doubt.  That’s why I love vegetables, you know what they’re about!”
~Tom Jones and Harvey Schmidt, The Fantastiks